Taking screenshots on the Chrome browser is easy. You can use the native PrtScn button on Windows or the Cmd + Shift + 4 keyboard shortcut on macOS. However, they lack advanced options like full-page screenshots, scrolling screenshots, annotations, automatic cloud sync, and more. Thankfully, you can use third-party Chrome extensions to get these much needed additional features. Here are the best Chrome screenshot extensions.

Do you know, Google Chrome DevTools has an inbuilt option to capture screenshots? It’s not as seamless as Right-click on-page and select capture screenshot like you have on Firefox, but it does give you some useful options.

To capture the screenshot on Chrome natively, open Chrome developer tool using the keyboard shortcut Ctrl + Shift + I for Windows or CMD + Option + I for macOS, press command + p or Ctrl + p, and type screenshot. Select the full-page screenshot option.

You can capture two types of screenshots with it, full-size screenshot orvisible screen. You can adjust the resolution and zoom. It can also capture screenshots for the mobile version of the webpage and you can choose a few different mobile layouts. Click on 3 dots menu on the top-right to begin. Best for – Taking a full-page screenshot of the current window

Full Page Screenshot is a simple screenshot capture extension that allows you to capture the entire screen with just one click. It works just like the native feature of Google Chrome to capture screen but in a more optimized way.

Click the icon and wait for it to traverse the page. It opens a new tab where you can download the screenshots as an image or PDF. You can change the image format and the PDF page size in the settings tab. The only problem with the scrolling screenshots is that they don’t recognize and remove sticky headers and footers of the webpage automatically. 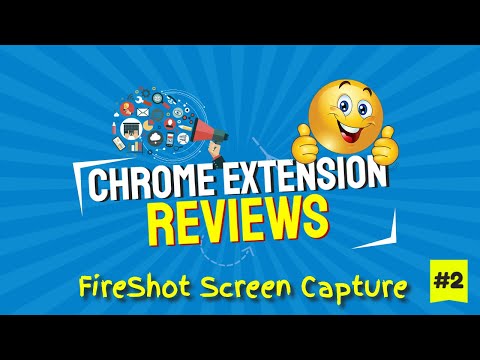 Best for – Annotate, crop, edit the screenshots in the editor

Fireshot Chrome screenshot extension does everything that the previous extension in the list did. In addition to that, it can take screenshots of just the visible part of the webpage too. It can also take a screenshot of the selected area using the cursor.

You can enable hotkeys to capture the screen and save time. The biggest selling point though, is the option to annotate, crop, and edit the screenshots in the editor which you can download from the settings menu. Fireshot gives you more control over the outcome. The basic version is free but you can get the pro version with all features unlocked for $35.

Read: How To Use Chrome Extensions On Android

Best for – Uploading the screenshot to the cloud with shareable URL

Gmail Screenshot extension, which has nothing to do with Gmail, offers timed desktop captures for mouse hovers, webpage menus, and more.

You begin with selecting the tool, capture the screenshot and do a little editing in the editor. This extension offers one feature that’s unique to Gmail screenshot, it uploads the screenshot to the cloud. You can share this screenshot instantly with the URL. That makes sharing screenshots almost effortless. You can create an account and save all the screenshots on your Google Drive account.

Gmail Screenshot is best for people who want a quick screenshot tool with cloud storage and instant sharing features. The extension is free and if you use it for professional usage, you can check out their prices here.

Nimbus packs a lot of impressive features for a Chrome screenshot extension. You can easily select or take scrolling screenshots, record videos of the screen or even capture delayed screenshots.

You can capture the screen in the mobile layout using the Nimbus extension. It also allows you to capture a screenshot with a slight delay, and unlike the entire page, you can select a part of the page and scroll to capture only the relevant information. You can also record video of a tab, entire desktop or through the webcam. Finally, add a watermark to the screenshot in the editor to prevent abuse.

Must Read: 3 Apps to Take long Screenshots on Android

Nimbus is truly a professional screenshot capturing tool with multiple features and it is recommended for users who want a customizable extension. It is free to use.

Best for – Add a quick Screenshot button in tweets

As the name suggests, Twitter screenshots let you capture your favorite tweets with the click of a button. Taking a screenshot of tweets can be tiring if you use the traditional or even advanced methods like selected area screenshots.

Best for – Add a quick Screenshot button on the YouTube player

Whenever you wish to take a screenshot of a frame, press the button and it automatically downloads the screenshot to your computer. It only captures the frame and ignores the player control buttons which is cool

YouTube Screenshots is best for users who want a quick tool to extract frames from videos. It is free. Unlike Twitter Screenshots, it can autosave images.

This is really nice considering how long it takes to run a full disk encryption on large amounts of data.TrueCrypt works with Windows 10, 8, 7, Vista, and XP, as well as with Linux and Mac operating systems. It's also really simple to use and has some pretty neat, unique features.In addition to password protecting a partition, you can even add one or more keyfiles to it for increased security. It lets you encrypt the system/boot volume as well as any other internal or external hard drive. Furthermore, you can use TrueCrypt to build a single file that acts as a drive, complete with its own encrypted files and folders.If you're encrypting the system volume with TrueCrypt, which is the you're actively using, you can still carry on with regular activities while the process completes in the background. Decrypted for mac. DiskCryptor is one of the best free disk encryption program for Windows.

A screenshot looks incomplete without a proper frame. To solve this problem, Standardized Screenshots works as a one-click solution. It takes a snapshot of the current window, adds a macOS-ish title bar and shadow effect.

Just click the screenshot extension for Chrome to snap a screenshot. It generates a preview which you can click to download the image with frame and drop shadow included. There is, however, one small caveat in that it doesn’t capture screenshots of some websites due to Chrome’s restrictions. Other than that, it works flawlessly.

HTML Elements Screenshot is a simple lightweight Chrome screenshot extension that lets you capture a full or partial screenshot from any webpage but you can select desired HTML5 elements.

Click on the extension icon and as you move your mouse, elements on the webpage will be highlighted with a green color. Once you select an element, a popup window will appear that contains a loader image. Once the screenshot operation is done, the loader will be replaced with the screenshot.

Best for – Take a screenshot, edit it and send it to teammates and developers

If you are someone who works with a team of web developers, then this extension is for you. Simply put, Market helps you to take a quick screenshot, annotate it and then send it to project management tools such as Trello, Jira, Asana, Slack and few others.

Awesome Screenshot does everything that we shared in the above Chrome screenshot extensions. You can take selected or scrolling screenshots, annotate screenshots and blur them, record screencasts, and then finally upload it directly to project management tools like Trello and Jira among others. There is also cloud storage support for Google drive.

What’s more? You can also take screenshots of your desktop now. That’s unheard of in the browser extension realm. The Chrome extension is completely free with no in-app purchases whatsoever.

Lightshot has made a name for itself because it is the easiest and fastest screenshot app for the Chrome browser. The extension is light in weight and captures screenshots really really fast. You can select any part of the webpage. After selecting it, you can edit it to your liking and save it on your computer. There is also support for cloud storage.

A neat trick is to search the hard disk for similar-looking screenshots. Useful if you work with screenshots a lot and find it difficult to locate it occasionally.