The XQuartz project is an open-source effort to develop a version of the X.Org X Window System that runs on OS X. Together with supporting libraries and applications, it forms the X11.app that Apple shipped with OS X versions 10.5 through 10.7. For example, copy and paste between applications for X11 and Mac OS X's 'Aqua' user interface is now possible with the regular keyboard shortcuts, and programs may be minimized to the dock. X11.app was initially available as a downloadable public beta for Mac OS X 10.2 Jaguar and later included as a standard package for Mac OS X 10.3 Panther. In Mac OS X 10.4 Tiger X11.app was an optional install included on the install DVD. Open source X11 server that helps you launch X11 apps with a click of the mouse XQuartz became the default X11 implementation for many OS X users after the 10.8 iteration, when Apple decided to completely remove the X11 server and client libraries from the default OS X installation. 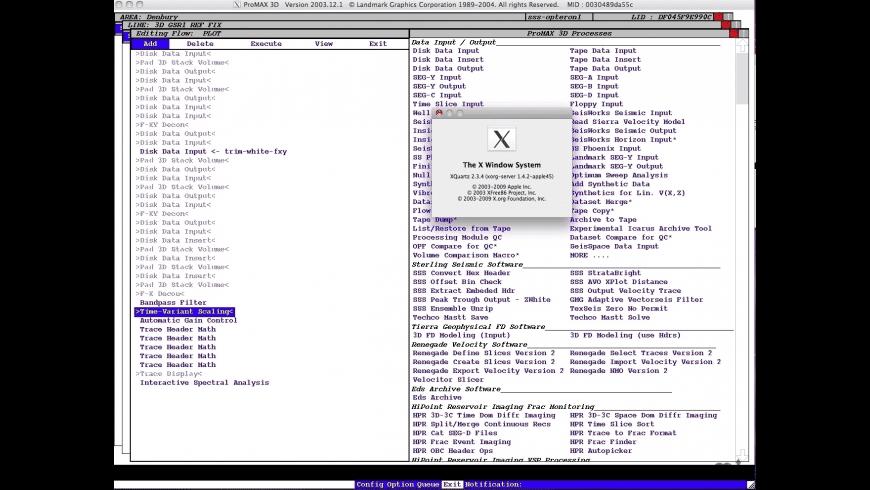 XQuartz is an open-source version of the X.Org X server, a component of the X Window System (X11, or shortened to simply X, and sometimes informally X-Windows) that runs on macOS.[1] It formally replaced Apple's internal X11 app. The name 'XQuartz' derives from Quartz, part of the macOS Core Graphics framework, to which XQuartz connects these applications. XQuartz allows cross-platform applications using X11 for the GUI to run on macOS, many of which are not specifically designed for macOS. This includes numerous scientific and academic software projects.[2]

In Mac OS X 10.4 Tiger, Apple's X11 implemented X11 protocol release 6.6 (X11R6.6). This implementation includes an XFree86 4.4 based X11 window server, Quartz rootless window manager, libraries, and basic utilities such as xterm.[3] 'Rootless' means that X window applications show up on the Quartz desktop, appearing like any other windowed Quartz application (that is, not in a virtual desktop contained within another window). In Mac OS X Leopard, X11 was updated to use X.Org Server (X11R7.2) rather than XFree86.[4] The source code for X11 is available from Apple. Some source code is available under the Apple Public Source License while the bulk is licensed under the MIT License.

The current version of XQuartz is a DDX (Device Dependent X[5]) included in the X.Org Server and implements support for hardware-accelerated 2D graphics (in versions prior to 2.1), hardware OpenGL acceleration and integration with Aqua, the macOS graphical user interface (GUI). As of version 2.7.11, XQuartz does not provide support for high-resolution Retina displays to X11 apps, which run in pixel-doubled mode on high-resolution displays.

Dxo filmpack 5 for mac. DxO's FilmPack 5 Elite Edition adds an element of analog photography to your digital workflow. Comprising more than 80 distinct film types, this software includes a variety of favorite black & white, color negative, and color positive films whose unique qualities and grain structures can be applied to digital images. Beyond applying the film. For any stability issues, compatibility with the latest Adobe CC products and the latest Mac/Windows OS, and for future updates and our support, we strongly encourage you to purchase the latest version of the Nik Collection by DxO or to test our free 30 days trial version. DxO FilmPack 5 for Mac is a wonderful software for making digital photos more colorful and awesome. Professional photo editors, graphic designers, and digital artists can take their photography to the next level with this awesome software. The program has no complicated settings, just intuitive drag-and-drop controls.

Apple created the XQuartz project as a community effort to further develop and support X11 on Mac. The XQuartz project was originally based on the version of X11 included in Mac OS X v10.5. There have since been multiple releases of XQuartz with fixes, support for new features, and additional refinements to the X11 experience. Apple is a contributor to the XQuartz project and has worked to ensure that X11 works as expected with macOS and latest available versions of XQuartz.

X11 server and client libraries for macOS are available from the XQuartz project at www.xquartz.org. Download the latest version available.